So here’s the thing. I am a HUGE night owl. I find myself to be the most productive in the evening/night time. so being able to find places for me to study while living in the city was a bit of a struggle. since I studied with a private program and not a university I had to find other study options when the CAPA Centre was closed. Capa was super helpful about helping me find places to study but in reality, I wanted to find a place to that makes life easier and I am able to be productive. Here are a few of the study spaces that worked for me. 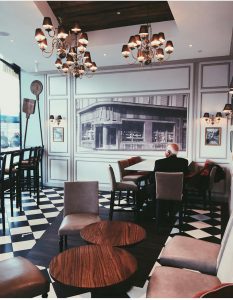 Paul Cafe was one of my go-to spots for sure. Not only did they have the best Parisian style baked goods but it was a great atmosphere to get work down. It is the Norm for the people in England to spend hours in a cafe getting work down so don’t feel weird if you need to knock out that 10-page paper that you’ve been procrastinating on. Not to mention they have Paul cafe’s all over London and most of them don’t close until 10 or 11!

This was one of the only library’s that I really enjoyed. It was so relaxing and it is a very family oriented/ community library so there are plenty of people using the library but it’s still super quiet and peaceful. However, I would suggest coming to the library earlier rather than later. Seats tend to go quickly here.

Okay, so this library is so cool! When I found out that it was open to the public I jumped at the opportunity. For one, they have really awesome study desks which give you some individualized space and make it easier to focus. Not to mention you’re around a bunch of cool film students and it gives you some opportunity to make some new friends. This does close a little earlier than the rest of the options, however.