Back within 16th century London, William Shakespeare was known as one of the city’s most successful playwrights. At this time though Shakespeare was very successful, he was not the most famous writer during this time (I know, shocking!) That title could have arguably be given to another famous writer at the time, Edmund Spencer who wrote the famous epic The Faerie Queene. But even though Shakespeare wasn’t the most famous writer during his own time, he definitely was from the 17th century up until now as  his memory and literary greatness is still recreated to this very day, whether it’s directors recreating his famous plays into movies, theatres recreating his plays on the communal stage, or putting his works into anthologies.

Our group had the amazing opportunity visiting Westminster Abbey ( which I may add is some of the best gothic architecture I have ever seen). It’s a shame that we couldn’t take photos inside, but within the abbey are the graves of famous Kings and Queens of England. But not only are Kings and Queens buried here, but famous writers such as Geoffrey Chaucer and theologists such as Charles Darwin are  buried there as well, not to mention all the dedications to many more of them on the floors and walls of the abbey. What was very peculiar to me when we got to a section of the abbey known as Poet’s Corner was the size and imagery of William Shakespeare’s memorial.

William Shakespeare’s memorial in Poet’s Corner had a full statue of himself leaning on a podium of books stacked upon the busts of faces that were probably famous Kings and Queens. This memorial is placed right in the center of other writer’s memorials such as Jane Austin, Percy Bysshe Shelley and John Keats. Even though this is a beautiful dedication to the significance of William Shakespeare, a statue of this magnitude would have never been constructed for him during his time, as the statue was actually built in the 1741.

Whether it’s a production a theatre company is putting on, or a statue constructed in the halls Westminster Abbey, William Shakespeare’s legacy will seem to be recreated over and over again. It just goes to show that Shakespeare’s contribution to literature has immortalized him, 400 years after his death. 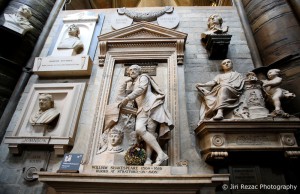