From the beginning of this trip we quickly learned that few things in Cuba go as planned. Our flight from Miami to Havana was delayed 5 times and we spent 10 hours in the airport getting to know each other. Events we had anticipated in Cuba were rescheduled or cancelled more times than I can count, and it has rained almost every day during what is supposed to be the dry season. Despite this, one thing we could always count on was breakfast. For the past nine days each day has brought a new class, experience, or adventure. But each day Carlos, one half of our host family, has also brought us coffee and toast, the classic Cuban breakfast with his fresh homemade juice. The only change to our beloved morning routine was that this morning we did not have any power due to heavy rains and strong winds last night. Thankfully, this had no effect on our breakfast. 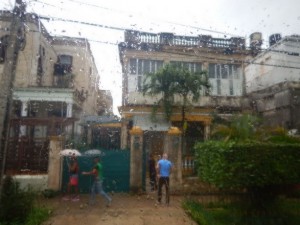 Following our coffee and toast we arrived to the Centro de Estudios Martianos to attend our lecture. Today’s class had been changed from focusing on Cuban religions to Cuban music. As you can see, in addition to the information provided in these classes we are also learning to be quite flexible with our schedule. During this Cuban Beats lecture we learned about the evolution of music, rhythm, and dance in Cuba. This was a nice companion to the instruction we already received in the art of salsa dancing class we had taken days before. Today was our first hands-on lecture in which we had the opportunity to play one of several Cuban instruments which ranged from classic maracas to the unexpected cowbell. Those not playing instruments gave their best shot at a few more Cuban dances. While it may not have been our best performance, we were definitely able to enjoy the moment and laugh at ourselves.

The second aspect of our day was the trip to the Museo de Guanacaboa. Guanacaboa is a city in Cuba where the religion of Santeria was first established. Santeria is a new religion created by those Afro-Cubans brought to Cuba by the Spanish as slaves who were banned from practicing their former religions or worshipping their deities and instead had Catholicism imposed on them. Rather than abandon their beliefs and culture, many Afro-Cubans merged these two very different religions and used the Christian saints as surrogates to pray to their deities. Essentially they called their deities by the names of the saints, who had similar characteristics, in order to still be able to practice what they believed and maintain their identity and culture. In this museum we saw the elaborate shrines built for each deity. In order to keep the deities happy, worshippers would leave certain foods, drinks, or items which that particular deity was knows to like. Certain colors were also identified with each deity. Beautifully ornate outfits were designed for the worshippers in the corresponding color to their deity along with specifically symbolic accessories such as fans or maracas. Overall it was very interesting to see the adaptation of these two nearly opposite religions into one.

I was surprised to find today’s lecture and museum visit had very similar underlying messages. During the lecture it was brought up that Afro-Cuban music was banned from being played in public places despite the fact that the Afro-Cuban culture and people were a major contributing factor in the development of Cuban music. In addition to this, it was typical for black Cubans to struggle to find employment outside of being musicians, which was, in turn, deemed a disrespected occupation. I felt that this air of hostility toward Afro-Cuban culture was carried over in our museum tour as well. The creation of Santeria was due to the fact that Afro-Cubans were banned from practicing their religions and were instead forced to adopt Catholic practices. This tension between white Spanish Cubans and black Afro-Cubans is still evident today. Presently the issue can be clearly seen economically as many low paying or manual labor jobs and few high ranking jobs are held by black Cubans.

In contrast to this, I saw the introduction of Santeria and the perseverance of African music as a testament to the resilience of African Culture in Cuba. This strength of the Afro-Cuban community has led to the emergence of a new, mixed culture in order for Afro-Cubans to balance their identities of being both African and Cuban.

There is an overwhelming aspect of polarity in Cuba’s culture. As an outsider it is intriguing to see brightly painted classic 1950’s cars parked next to white sedans produced on a few years ago. Yet these contradictions of sorts are fairly commonplace on this island; beautifully painted houses sit next to water damaged hoes falling into disrepair. Houses and public buildings commonly lack flushing toilets or running water but are nearly always furnished with televisions. It was very interesting to find that what we might consider luxury items were more easily accessed than items I would deem necessities. 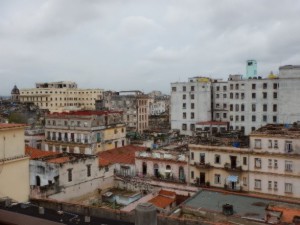 Today seems to highlight major disconnects or contradictions in Cuban culture. Racial disparities, while clearly evident, seem to go ignored or disregarded. This was also a reminder that such issues are ones we also struggle with in the United States. In addition to this, it also feels as though the average Cuban lives their life half in the mid-20th century and half in the present day. It could be suggested that there is common experience shared by all Cubans: learning to make do with what they have, no matter how little, whether it is due to religious restrictions or economic embargos. Despite the many political and social restrictions and oppressions the Cuban people face, the adaptations of culture and overall resilience and success of the Cuban people is inspiring and deserves admiration.