Before arriving in Havana, Cuba, I was worried. As a black student attending the University of Massachusetts Boston, by way of Virginia, I was an outsider to the group of students coming from the University of Massachusetts Lowell. There was not only a difference of school location, but also a difference of race. In the weeks leading up to our departure I wondered, “Who will I talk to?” “How will I feel?” “Will I be seen as strange? As different?”

As soon as I stepped into Jose Marti International Airport in Havana, mind you more than 7 hours after our original arrival time, my worries were alleviated; I saw black people! Cubans dressed in green uniforms welcomed our group at around 5 am into the small building. All of the Cubans working at the time were brown, black, and smiled as they gave me instructions in Spanish. I felt a sense of belonging that had been missing since landing in Miami and meeting my group, and each day in Cuba this sense of belonging increased. 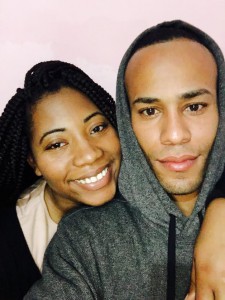 I met Eider, a young Cuban man, who I quoted above (also pictured above on the left, I am on the right). Through this quote, and the many other subjects we discussed, I could sense his pride in being a black Cuban. This pride is not only shown by Cubans’ words, but even in their institutions and culture. The Museo Nacional de Bellas Artes (National Museum of Fine Arts) is one example of these institutions. 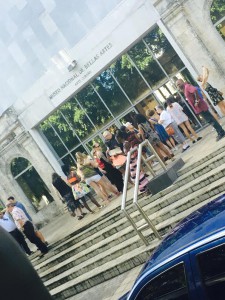 I am generally not one who appreciates nor enjoys art; however, many of the works in the Museo Nacional de Bellas Artes (pictured above) made me think I should change my opinion. Unlike currently in the United States, the Cuba of today holds a strong appreciation for not only its Spanish roots, but its African roots as well. Many of the collections in the museum depict elements from the Yoruba people, an ethnic group from West Africa. Many of the slaves brought to Cuba by the Spanish beginning in the 16th century were of Yoruba origin. Works in the museum also illustrate slave life, social life, and the unique intermixing of cultures that occurred in Cuba and other Caribbean societies. In one painting, three generations of Cubans were depicted. The women depicted were different shades, had different hair styles, but were still all Cubans.

I asked our guide about the reaction to the Afro Cuban artistic movements in Cuba and she explained the importance of art in instilling pride in the Afro Cuban heritage. Art is probably my least favorite subject, but I place this museum close to the top of my enjoyable moments in Havana.

Museums and lectures are informative, but I feel I got the most of the trip when time was not structured and planned. Our trip to the market (pictured below) after the museum allowed for a little freedom. We entered into a sort of bazaar, with small shops selling souvenir pieces. Again, the influence of Africa was evident in the sorts of items that vendors were selling. There were mini statues of women and men, painted black and in traditional dress, posed in dance-like positions. CDs of African inspired rhythms of the Congo drums were also sold. A woman even stopped me to ask about my braids, as her business is offering to braid the hair of tourists entering the market! Braids are another element of African heritage. While extremely touristy, I again enjoyed seeing African heritage infused into the Cuban culture. 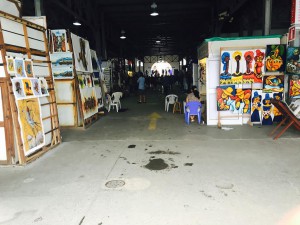 Although the museum and market were extremely informative, I will again return to the quote I started with; “estoy lleno de orgullo de ser Afro Cubano.” Eider was proud of his Afro Cuban heritage. His sense of pride helped me feel proud of being black. While I could not get this from my group, I learned a lot from my compañeros, but I learned even more from the Cuban people. I left Havana proud of my African heritage. Proud to be African-American. 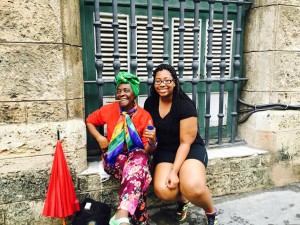