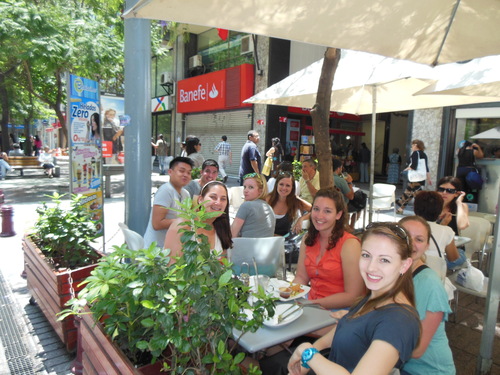 I’m not going to lie, even though its only been a few days, I do miss my American burgers. We went to a small ice cream shop that reminded me of Friendly’s. They also had “normal food,” but their focus was ice cream. I had a cheeseburger with bacon. I know I can’t really expect for the burger to taste the same as an American burger, but it still tasted alright. I still want to try authentic Chilean food, but many of the places that we know of so far cater to tourists, so it’s not surprising to see hamburgers, pizza, hot dogs (garnished with avocados) and other foods that you would expect in the U.S.

After eating, we decided to go on a free tour that was in the middle of a plaza. This tour lasted 4 hours, but our tour guide was amazingly entertaining. He was a chain smoker and probably smoked about 5 cigarettes within a span of 30 minutes, but he was extremely kind and personable. He spoke with a mix of an Irish/Spanish accent about the history and certain key areas of the city. We saw Plaza de Armas, which is Santiago’s main square. They had people painting, dancing, singingand selling various knickknacks.
We saw Municipalidad, which is Santiago’s city hall. We also saw the old congress buildings and many other beautifularchitecture. I noticed many cracks and chipped paint on the building due to the aftermath of the earthquake fromFebruary 2010. The earthquake happened on a Friday night at 3 a.m. in the middle of the morning. It was a 7.9 on theRichterscale in Santiago and an 8.8 overall in Chile. We finished the tour in the Barrio Lastarria at a cafe.
After the tour, we went to the flea market to buysouvenirs. Ihaven’tfound anything I like yet, but hopefully we’ll see some things in Talca!