January 4th was an eventful day for us students in Cuba. We started with a scenic route around Havana, the capital, which included Cuba’s National Hotel, Cuba’s capitol building, and the statue of Maximo Gomez, a Cuban war hero.

Former UN Translator and our Cuba Expert, Ana Elena, introduced to the Cuban customs when building statues of their heroes. If the statue is mounted on a reared horse, the hero died during battle; however, if their horse is standing properly, the hero died of natural causes. Additionally, if the statue is oriented towards the sea, the hero was either a foreigner or was a Cuban who died abroad. In the case of Maximo Gomez, his statue is on a horse which is standing properly, but is also oriented towards the sea, because he was a foreign-born Dominican, who died in his old age.

We arrived at our first destination. The residence of the legendary author, Ernest Hemmingway, who lived in Cuba for 27 years. At his residence, there has been a long tradition of children in the area playing baseball in the yard, so today we joined the children to a game of ball.

We started with the ‘jefe’ or boss, creating the two teams, evenly split between us college students and the children.

The game started between our two teams, for several minutes, a stalemate occurred where neither team could get the edge on the other. We struggled to score runs, but neither team was successful with the score 15 minutes in remaining at 0-0.

In the end, there were a total of 3 runs scored, with two of them being home runs, one of which scored by our UML student Scott, the other by an older Cuban gentleman who had a passion for baseball. The final tally being 2-1.

After our fun game of baseball, we continued into the rest of the Hemmingway Estate, where we were able to get a peek into his home, which has been virtually untouched since he left in 1960. We were able to see into his living room which were watched over by the heads of the game which he caught during his trips to Southeastern Africa. Antelopes and Wildebeest heads lined the walls with chairs and tables in the center of the room for seating in the 1900s style.

In his bedroom we were able to see his favorite books which were in a bookshelf on the left to his bed. On his nightstand were his glasses neatly sat out of their case, as if he had woken up and walked out. One thing I found interesting was the map of British East Africa, which was a colony under the British Empire and is composed of the modern-day nations of Kenya, Uganda, and Tanzania. This map is peak into history as whilst Ernest Hemmingway was living in Cuba, these nations were still under British colonial rule. In Hemmingway’s closet, we were able to see his hats, boots, and his war correspondent jacket from his time in with Time magazine. The greenish-brown colors of the jacket are reminiscent of the U.S. military uniform during the Second World War. In his personal restroom, we saw his toilet and his shower complete with (the thing that goes above toilets), all in 1920s technology, allowing us to take a peek into the past. The most intriguing thing about Ernest Hemmingway is that he kept track of his height and weight on his wall for several years. We can see that between 1954 and 1960 his weight hovered between 198 and 235lbs. In Hemmingway’s study, we can see his desk which is the home several books and perhaps his prized possession, the head of a hunted leopard. In Hemmingway’s backyard, his four dogs, Black, Negrita, Neron, and Linda. Interestingly enough, two of the dogs were named black in two different languages, English, and Negrita, being the feminine adjective for black in Spanish.

Once we left Hemmingway’s house, we went to Cojimar, the place of origin of Santiago, the protagonist in Hemmingway’s novel, Old Man and the Sea, where we ate authentic Cuban taros, which are fried battered fish poppers. Additionally, we met the grandson of Santiago who still lives in Cojimar. He took us on a tour and showed us the area including the one of the first monuments of Ernest Hemmingway ever built worldwide, which is next to the Torreon which is a castle on the shore of a sea. The statue looks out towards the sea, which I believe is a play on the statue Cuban customs; as Hemmingway was a foreigner and left the country, his statue looks out towards the ocean, north, which is where he was from.

When arriving in Cuba I honestly had only the slightest idea of what to expect. We read books and spoke about how unique the country was, but nothing can explain the feeling of landing here and seeing just how beautiful the country is with my own eyes. We arrived with the warm sun beaming down on us at a toasty 88 degrees Fahrenheit, which was a relief coming from the chilly weather in Boston. From the first steps out of the airport, I was in awe of how different everything was. The first thing I spotted was all of the antique cars from the ‘40s and ‘50s, which I had only really ever seen in movies. Now, I was suddenly looking at almost an entire parking lot filled with cars of vibrant colors from an entirely different lifetime than mine. We got on to our bus that would be taking us around everywhere for our trip, and I was absolutely glued to the window. The view was of an older city with tall buildings with old fashioned structures like you would expect, but also a mixture of tropical trees and a large presence of people everywhere you looked. 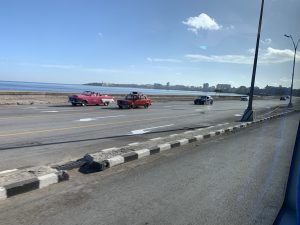 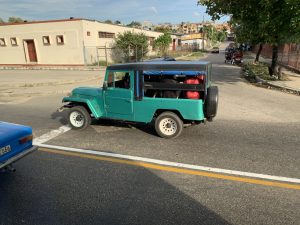 Then we arrived at the residencia and again I was in complete awe. We weren’t told a lot about our living situation, only that a woman named Natalia would be housing and feeding us for the next two weeks. Walking into the residencia I couldn’t even believe how beautiful it was. There was bamboo furniture, a balcony overlooking our neighborhood and a large family-style table where we would share our meals every day. 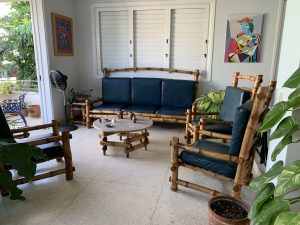 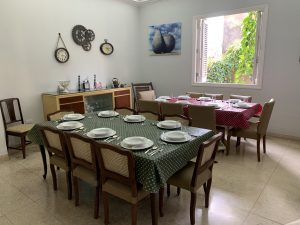 Now we get to the best part of the entire day: Natalia’s AMAZING cooking. We were served a delicious traditional Cuban meal with white rice, chicken, lentil beans, vegetables, a sort of sweet potato fry, and a sweet custard for dessert. All of the food was so unbelievably fresh and filling—it was such a delicious meal. During our meal, we listened to a presentation by our API director in Cuba, Emily. She wanted us to be aware of the differences between American and Cuban culture because there was a lot to learn. One of the main points she wanted to get across to us was that the Cuban people are a lot friendlier than any stranger you would meet in the U.S. She wanted us to know that people would come up to us and ask us questions about how we’re doing and where we’re from. While listening to this I couldn’t really imagine a situation like this happening, because if a random stranger came up to you in Boston and started asking you questions about yourself you would immediately throw a red flag. 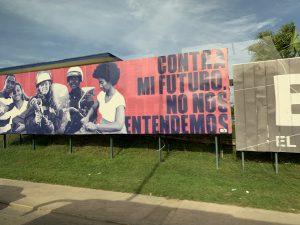 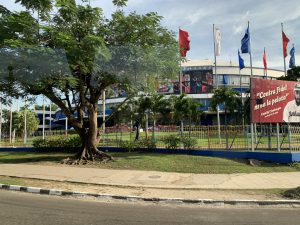 However, after our meal, my fellow classmate Maria and I went on a walk to go adventure around 23rd Street, to get a sense of the area we were going to be spending the next two weeks in. We were walking down the street for, I would say, less than two minutes and a man came up to us and asked: “Beautiful ladies, where are you from?” And we had the most pleasant conversation with him as we walked. He told us all of his favorite restaurants to go to on that street and then he said, “I hope you ladies have a nice stay here in Cuba,” and he just went on his way. This was our first experience with a Cuban local, and it was incredible. Before this experience, I don’t think I have ever had a stranger come up to me on the street and not ask me to buy something or ask for money. The man truly just wanted to have a conversation with us because he was friendly and curious. When the sun went down the city came alive with bright lights and loads of people walking along the streets all dressed up for their nights out. We even saw this old fashion movie theater, with a large antique neon sign that lit up the entire street. 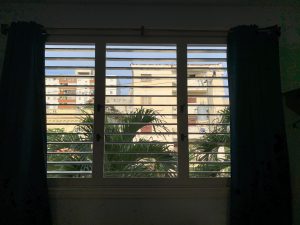 Finally, to end the most perfect first day in Cuba all 12 of us students decided to go out together to a restaurant called “1909,” where they gave us an entire private room just for us. As we all ate and got to know each other we also got the complete experience of Cuban hospitality. We all practiced our Spanish with the wait staff, and they practiced their English with us, and we were all having an absolute blast. Our waitress Maria showed us some of her salsa moves with one of the other waiters. Right after, another waiter came over and showed us some of his most impressive magic tricks. They also really wanted to play American music that we all knew and liked. In all the times I have gone out to eat with a group in the U.S. I have never gotten service with a wait staff who wanted to have a good time with us. It was such a unique and amazing experience. All and all our first day in Cuba were a perfect transition to the differences in our cultures and were truly breathtaking every step of the way. 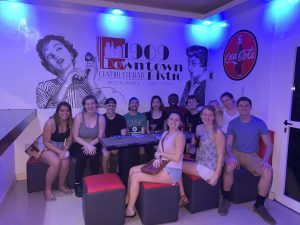 This traveling seminar will use the Cuban experience as a backdrop for experiential learning, along with discussions with professionals in that particular field of study, and writing assignments designed to allow students to reflect upon their experience studying and living in Cuba. Students will gain a multi-disciplinary overview of Cuban contemporary culture and further understanding from a cultural, socio-political and historical context.

You can also read blogs from previous trips to Cuba listed below or from other destinations across the globe UMass Lowell students travel to.