When one asks a Cuban citizen about the accomplishments of the Revolution, one would get responses that include universal healthcare, independence, and most importantly their public education system. Education and the origins of the education system in Cuba would be the overriding theme of the day. After a delicious breakfast of fresh scrambled eggs, sweet pancakes, refreshing guava, and Cuban coffee we headed to Centro de Estudios Martianos (CEM). This is where we attend lectures on the culture, economy, and history of Cuba during our two week stay. On this particular day, we attended a lecture that focused on the education of Cuba pre and post-Revolution. Before this lecture I had a basic knowledge and understanding of the Cuban education system. I knew that there were some similarities to our system of education, like having public schools and similar grade structure such as kindergarten, elementary, middle and high school. I did not expect, however, to be so intrigued with this particular topic. I was amazed at how the government was able to transform their education system from an inconsistent and disjointed entity into a public and all-inclusive institution that allowed the country’s future generations to thrive.

To start off our lesson, we learned there was a huge gap between the public and private institutions before the Revolution. Those who were more affluent and could afford the private institutions, known as the Bourgeois class, were also able afford private tutors to teach their children. This meant they received a far more advanced education than those who attended the public institutions. Since many from the lower class were not pushed to attend school the country’s youth suffered. Illiteracy was also a prevalent issue. This was simply unacceptable to Fidel Castro who made it a priority to fix this education problem that had been ignored by the government under President Fulgencio Bautista. Castro wanted to solve the problem of illiteracy in Cuba and educate the new generation based on the ideals of socialism and their culture. It was of dire importance to the masses he proclaimed. The call was made to the people of Cuba. School towns were made, teachers began to have more jobs, and all the children of Cuba were able to attend school no matter their financial situation. There was now the ability to create schools for those with learning disabilities and the visually and hearing impaired. I was truly fascinated by the progress that was made after the change in power. 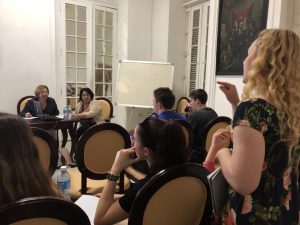 I enjoyed every second of this lecture and I can attribute the strong interest to this subject mostly to the knowledge or our Cuban professor. Before starting the lecture, she had us make a list of questions we had about the topic of education. I thought this was extremely helpful and, in a way, refreshing. I had never had a professor start a class like this. I also was extremely jealous of the students at the University of Havana because unlike in the United States college is free. Yes, you heard me, FREE! No need to pay to get your degree even if you want to pursue a career in healthcare, like me, which means a lot of payments over many years. After an hour and a half, which seemed to fly by, we headed off to our next destination but not before we stopped for a quick lunch. At this restaurant we were able to have juicy barbequed ribs, white rice, beans, and a little scoop of chocolate ice cream for a snack. 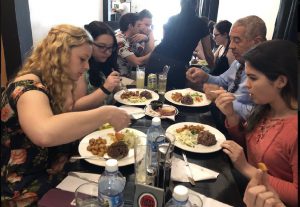 After lunch, we traveled to the Museo Nacional De La Campana de Alfabetizacion (Literacy Museum). We learned about the Cuban Literacy Campaign in which Castro called upon the people of Cuba to help educate their fellow Cubans across the nation. They were to end illiteracy by the next year. According to the museum curator, in 1961 before the campaign commenced the illiteracy rate in Cuba was 23.6%. A year later it dropped down to 3% in 1962. How was this feat achieved one may ask? Well it was carried out by young Cuban students and workers. These students answered the call by going out into rural areas and teaching the people how to read and write. For many kids this was their first time away from home. About 100,000 students nine and up, according to the museum curator, went out and taught. It was far different from their lives in the cities and they also had to deal with the danger of experiencing counterrevolutionary backlash.When I was nine, all I had to think about was what snack I was going to eat after school while I watched Full House. Eight of these students/workers were killed by counterrevolutionaries for teaching the people of Cuba how to read and write. To think these students had the possibility of getting killed while helping their fellow Cubans is eye-opening to say the least. It makes you think about your own life and remind yourself how lucky you are to have all that you do. 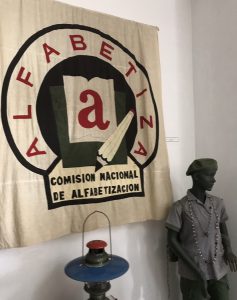 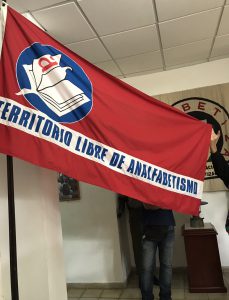 The museum also had on display a chalkboard where gashes were visible from gunshots it sustained during the Bay of Pigs invasion. It was a profound sight to see how large the gashes were and how the original drawings from before the battle were kept on it. Some communities were caught in the crossfire. Pictures of the select students and citizens who were killed by the counterrevolutionaries were on the walls. The students were not much younger than my brother, so to see their young faces on the walls and hear about the horror they endured was heartbreaking. There was also pictures of various citizens, including a 102-year-old woman, who had learned how to read and write. Making it to 102 is a huge accomplishment, but being able to have the mind at that age to learn how to read and write is out of this world. It was inspiring to see how a whole country was able to come together in order to achieve such an amazing feat. They wanted to provide their fellow citizens an opportunity to be able to interact in a new way with the people in the Cuban society. One exhibit that stood out featured select letters that the citizens wrote to Fidel Castro as proof of their success. This may not be the most efficient way to prove this huge feat, but nevertheless it got the point across that Cuba was able to increase the literacy rate by 20% of the population in just one year. Cuba has influenced many other countries and has helped them establish these types of literacy programs in their own countries. One of the most recent efforts can be seen is Bolivia. 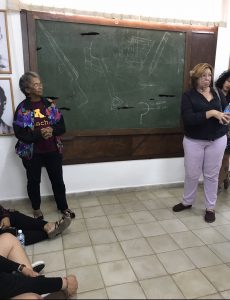 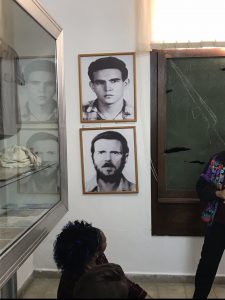 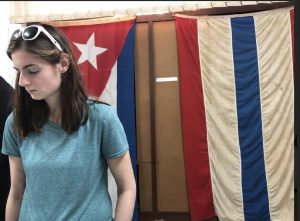