Across the shore of Cadiz is a little town know as El Puerto de Santa Maria; a beautiful hidden gem with historical treasures. At first glance, Santa Maria doesn’t seem to have too much going on, but as I share with you my experiences from today, I am sure you will see why its such an important city to the providence of Cadiz. Today we were able to explore Bodega Caballero and the Castle of San Marcos (Castile de San Marcos) and sample a bit of the wine in the end.

A “bodega” is the spanish word for a wine cellar that stores the wine as it ferments over the years before reaching your glass. Santa Maria is part of the triangle of Sherries in Andalucia, Spain. Including Santa Maria, Jerez de la Frontera, and Sanlúcar de Barrameda are the cities that support the manufacturing of wines that you are able to taste across Spain and mostly throughout Andalucia.

To begin our tour, we walked though the outside gates entrance where we discussed the history of the Sherry chain. Fun Fact 1: Outside of the main entrance was one of the three only trees left of its kind; the Dragon Tree. 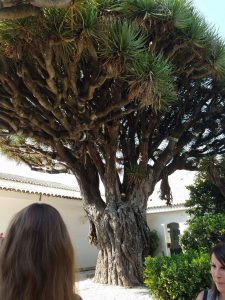 Upon entering cellar the rich odor of the fermenting grapes and yeast invites you into the magic of wine production. First Veronica, our fabulous tour guide, explained there are 3 different grapes used to make the multitudes of wines created here, we only focused on one. From that one grape, they are able to make 5 different types of wines based on the age of fermentation. They compress the grapes, transport the juices to wooden barrels, add various ingredients to help the process such as alcohol and yeast and wait. Fun fact 2: the barrels that the wine is placed in is 200 year old American Oak! 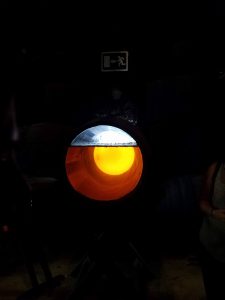 This shows the inside of the wine barrels. Top layer is the yeast layer that helps indicate if the wine is ready or not and how much alcohol may be contained.

An important part to note about this process how the wine is mixed. On the bottom level, is the oldest and the youngest is on the top. In order to make sure all the wine is the same,  1/3 of each wine is mixed with each other on the various levels. The longer they age the wine, the darker/ redder the wine becomes. 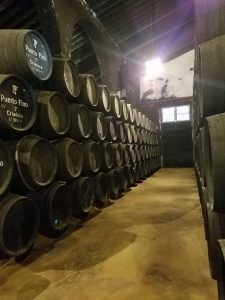 Proceeding through the cellar, we are pointed to a street, “Bodega Los Almizcates” that once was used by inhabitants of the city before it was closed off within the storage space of the cellar. 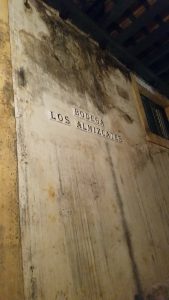 This old street progresses to another smaller room which contained wine that fermented for 20 and 30 years. Whats special about this room is that the wines aren’t mixed from top to bottom like in first room, but rather from left to right. I thought of this room as the “royalty room” as the barrels contained the “plaques” of autonomous people. 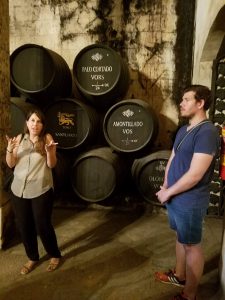 Top layer has been fermenting for 30 years, middle layer for 20 years. (Bottom wasn’t mention but I would assume 10 years) as said before, the process goes from left to right. This panorama doesn’t show it clearly but this is actually a round room. Here you can also see the plaques mentioned before

Fun Fact 3: On our way to the Castle of San Marcos we saw one of the few first maps that included North America. Christopher Columbus is not only well known in America just of his “discovery” of America, but it well respected by the people around Andalucia for leaving from Spain for his more well known trips. A lot of his time was spent here in Santa Maria planning trips and receiving the funds from the queen to make his voyages to the New World. 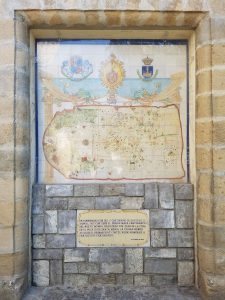 Approaching the Castle of San Marcos looks like a picture out of the medieval times. Once you pass the entrance is when you are able to see various influences come to life in the building. To summarize what Veronica said about its history, the Castle wasn’t a castle, but a structure that changed over time with whoever was in control. Majority of the changes after the mosque was under the ruling of King Alfonso. At first, the building was a roman temple, then converted to a mosque once the Muslims ruled, then converted to a christian church, and then finally a castle. At the right of the entrance is a fountain where the muslims washed their feet and hands before entering the main room where remains of the muslim decorations still are. 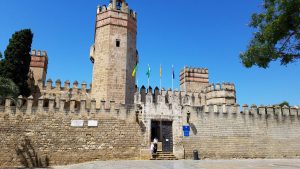 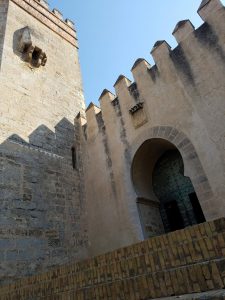 Adjacent to the praying room is a sacristy which was built in the 15th century. The sacristy was the most holy room of the entire building because this is where the sacramental gift remains here most of the time. The alter of the sacristy has carvings of gargoyles to protect the house from evil spirits that may have remained from the wars and violence happening outside of the building. It was built by a prisoner who spent 7 years creating it to lessen his sentence. Unfortunately, he passed away after completing the structure. 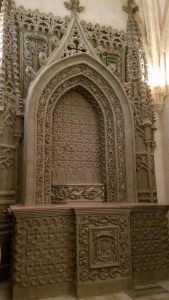 At the end of our castle tour, we had our wine tasting. Im a newbie to the entire experience so it was quite fun to try the traditional wines of Cadiz. Sherry wine is something here in Cadiz the people take pride in having. Pretty much what they create here is the primary wine found in local restaurants to accompany the “tapas” (like appetizers, but its the meal)  served.

In total we tried 5 types of wines: 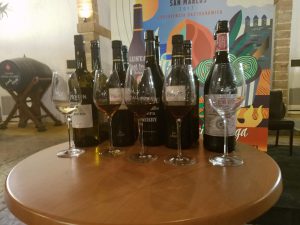 In order from left to right: Vino… Vermut

Well, I hope you enjoyed learning a little more about the craft of wine and the Castle of San Marcos. If there is ever the chance to visit Cadiz, be sure to take a little day trip as well to this antique town as well. Although not mentioned before, but there is the Plaza de Torros here which is another cool place to visit as well and various restaurants with excellent fish and seafood plates. 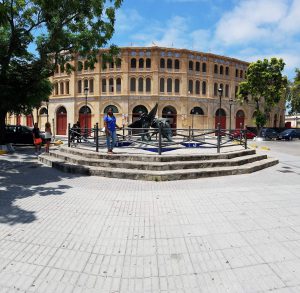 Plaza de Torros from an earlier time in my trip