Today we ventured to three different locations each with it’s own unique and incredible features. First, was Vejer de la Frontera.  This beautiful city is breathtaking and became more incredible with every fact I learned about it. The city is located at an altitude of about 200 meters above sea level and has about 13,000 inhabitants. Their patron saint is La Virgen de la Oliva, and the city has Moorish influence. 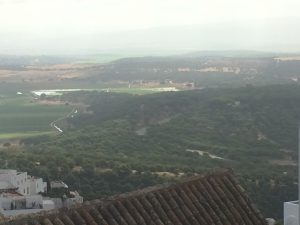 Since Vejer is located in such a strategic high position, it was often used as an enclave by different grouping of people who inhabited it, such as the Phoenicians or the Carthaginians. Later, it became a fortress against Muslim forces for many. 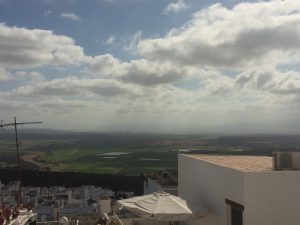 Another point of interest is La cobijada, which is both the type of outfit and a statue of a woman. She is covered from head to toe in a black costume, with the headpiece also covering one eye. It resembles somewhat the dress of Muslim women, and was influenced somewhat by many cultures encouragement of the modesty of women and was at one time the official dress of women in the city. 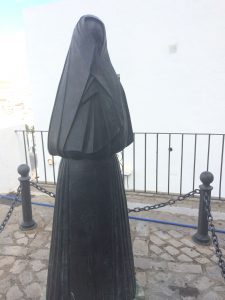 Due to it’s altitude, Vejer was also a watch tower for pirates coming into shore or other attackers in the day. The beaches of Vejer all along the coast were also part of the site of the important Battle of Trafalgar, in 1805 where Britain defeated the French and Spanish. This allowed Britain to become extremely powerful in the next 100 years. 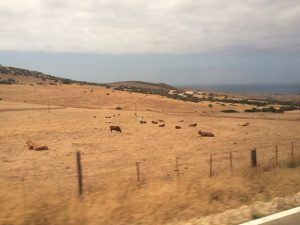 Bolonia contains the ruins of a Roman city, back from when Rome had control of Spain in the early first century. The Roman city is called “Baelo Claudia,” after the Roman Emperor Claudio. The remains of the city wasn’t discovered until around 1991. You can still see certain aspects of the city such as the remains of the baths, the theater, and the aqueducts. Bolonia is also extremely close to one of the most popular beaches, and also has a sand dune.

The baths, called Las Termas, were heated by a furnace that ran under each of the sections. To me, it’s incredible how they did this without the technology and knowledge we have today. 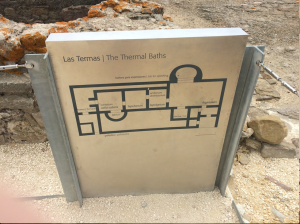 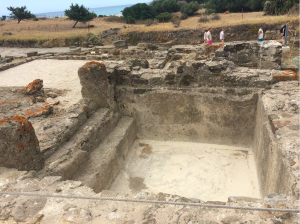 The theater was the typical amphitheater shape, in which it was a semi circle with passageways along the back for seating and essentially a backstage crew. It was currently in the process of being preserved further. 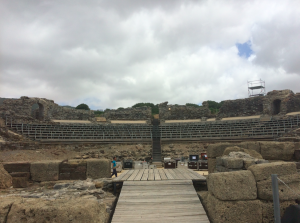 Only a small part of the aqueducts remained. The aqueducts were of course used to bring water into the city for all purposes from personal use and the baths, to fountains or farms. 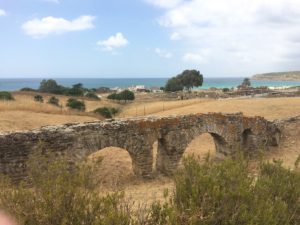 Our last stop was in Tarifa, a port city. Nowadays, it is a common sight for tourists and a stop for many cruise ships. It is the most southern part of continental Europe as well. Therefore, the coast of Africa (Morocco) can be seen here. In my humble opinion, this was one of the most incredible things to see. I wish the quality of the picture was better, but it was faint even while we were there. Look out over the horizon, and what looks like a distant mountain is Morocco! 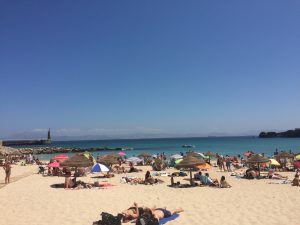 In my opinion, all three cities are worth visiting. Vejer and it’s breathtaking view, Bolonia and it’s gorgeous ruins, and Tarifa and it’s vicinity to Morocco. These cities are places that I had never heard of until I visited there, and I am so glad that I went. I have been in Spain under a week and already I am awed. Every day never ceases to amaze me, and I think only today did it set in that I was truly here and that Spain has such a rich history and breathtaking cities and landscapes.