The architecture in Spain is very interesting. So far I have visited multiple cities and landmarks and each has its own type of interesting designs. First many of the streets of Cadiz and other cities are very narrow. This allows the streets to be cool during the morning and evening as well as trapping wind and creating a breeze in the street. This type of intuition when building has amazed me especially in a city like Cadiz that is so old. Another thing I have noticed is many streets with arches or cathedrals and places of worship that use semi circular or arches in the building design. For example yesterday I visited the Oratorio de la Santa Cueva which used in the prayer room semi circular arches and other features to make the room echo as well as give the small worship space a more compact feeling. Many other structures use this type of design in different forms to achieve different things. I have just been so amazed by the intricate designs of every building, place of worship, and street while also remembering that much of what I am seeing has remained the same since it was built many years before. The dedication and detail take to create the littlest of things is amazing. Today we visited El Puerto de Santa Maria and while we were on the tour we were told that the altar displayed in the castle was used in a church and was created by a prison inmate that had worked for 7 years to complete it. The altar was designed and placed inside the church with gargoyles designed into the altar to help fend off the evil spirits. Even though it was built by someone who was not a well known person of the time being a prison inmate, I believe this piece could stand up to any of the other pieces of art I have already seen. The way a place or city was designed in the past is almost like a piece of art and it was before all the modern advances of our time. This showed me that even with all the new technologies we have today that could reproduce any thing you see, I think these buildings and pieces of art of the earlier time are amazing because they took a persons desire, drive and determination as well as many years. Now we can produce anything of that caliber in much less time, but giving your whole heart and desire to the work is what makes it special.

Today we visited El Puerto de Santa Maria and the Bodega. The Bodega was very interesting because we saw how the wine was stored and saw many prized wines. Also we learned about the history of the wines that we saw and how they were aged. The most interesting part for me was learning about the aging process and how the wines are made. Later we learned some more history about El Puerto de Santa Maria and saw the Castle of San Marcos. It was very informative learning about the intricate details of how the castle was used and seeing the preserved relics of past eras. We finished the tour by sampling the wines. They all had different tastes but I personally liked the sweeter ones better. 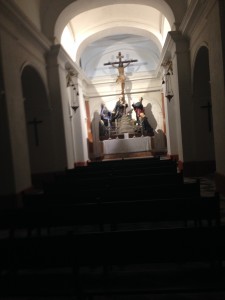 The arches of the oratorio create an echo. 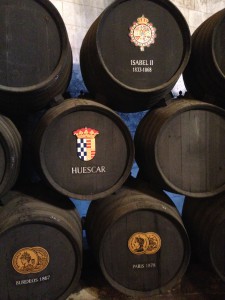 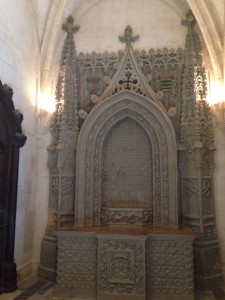 The Altar created by a prison inmate.