This past weekend in Barcelona the city took off work and school from Friday to Monday for the annual La Mercè festival. This has been an official Catalonian holiday since 1871, when Barcelona’s government first organized festival of many special opportunities to honor the Roman Catholic feast day of  La Mare de Déu de la Mercè, which translates to their Lady of Mercy. The entire city shuts down, you can only find restaurants, touristy shops, and mostly only stores located in the touristy locations are open. The festival does not only happen in one central location, there are many locations throughout Barcelona with events for all ages young and old. We were able to walk if it was a nice day or even take the metro to the different locations. Some of the events included a huge fair along the beach complete with rides, games, food vendors, homemade goods, and prizes. There were also many tents throughout the city near the events with homemade goods both material and edible, from candies, to fresh juices, jewelry, bags, clothing, and more. There were also concerts every day with singers, dancers, and musicians. Locations for children to play, activities for them, puppet shows, and animals. There were also parades almost every day! The events would start as early in the morning as 7 or 9 am, and would go until midnight and sometimes later! There was always something fun to do. 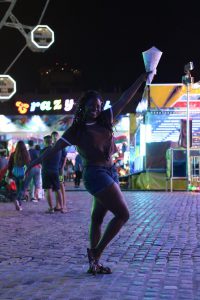 One of our favorite events was the Castellers, or human towers. This is a Catalonian tradition that they do for almost all of their major celebrations and holidays, we saw smaller versions of this at the Catalonia Day parade a few weeks ago but the ones this weekend were incredible in comparison. They did towers of almost 10 layers of people high and one or two tiny children would climb to the top of each one to complete it. It was amazing to see these groups carry out such a skillful performance coordinated to chants and music. The streets were packed with both tourists and locals that wanted to take in this wonderful tradition. It was definitely worth seeing. 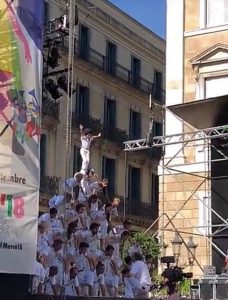 The Correfoc parade was something that at first when we heard about it, we were all terrified and weren’t sure if we wanted to go, but in the end it was my entire group’s #1 favorite part of the entire festival. Correfoc translates to Fire-Run in English, which I bet already sounds scary! In Barcelona, they close off an entire street and a roundabout for this parade. In the Roundabout, many groups from various churches around Barcelona with participants of all ages play drums and wear amazing costumes that all centered around a Devilish theme. They gather behind a massive, building sized set of doors where a fire, sparks, and fireworks show takes place as the Correfoc opening event. Once this beautiful show ends, the doors open and the groups travel through the doors and down the streets ini a parade like fashion spraying sparks into the crowds! They use handheld spark throwers or even animal floats that spray the crowd with larger amounts of sparks. They travel down a long street playing drums and spraying the sparks at the crowds while people either watch from the sides or run through the streets directly into the sparks. We were scared at first to get involved, but we saw how much fun people were having so we decided to join in and it was the best decision ever. For hours people danced and sang in the streets with sparks literally flying everywhere. It sounds a lot more dangerous than it is, while they are literally spraying you with sparks, they warn people to wear long clothing and possibly glasses/bandanas to cover your face, however we even saw people dressed in regular clothing dancing in the streets and no one seemed to get hurt! It was so much fun. 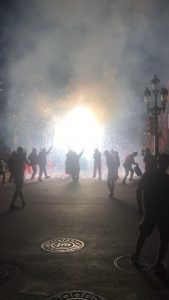 One of the many Correfoc firework throwing groups!

The closing ceremony was a fireworks and fountain light show choreographed to go along with an orchestra of music and it was the most beautiful thing we had ever seen. This fireworks show dare I say gave America’s Independence Day fireworks a run for its money! Many people in the crowd had mini sparklers to wave while they sang along with the music, and all you could see was a sea of lights under this wonderful display. It was truly an amazing sight. I would recommend everyone comes to the La Mercè festival at least once. I have never seen a city come together quite like this to celebrate for 4 days and not just in one central area but literally all across the city. If you can, definitely check it out at least once! I hope to come again some day. 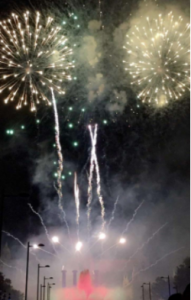 The finale fireworks show that closed out La Mercé 2018!