Today’s trip to school simulated a trip to Mars. After last night’s star party, the students were all riled up and ready to learn about the Red Planet. Due to material constraints, we had to run to separate activities but both entailed researching Mars. Andrew, Dayana, and Dr. Laycock presented an activity about living on Mars. The activity started with students ranking all the planets, and a few everyday objects like ice and soup, based on their temperature so that they knew how cold it would be if they had to live on Mars. That led off on a discussion about atmospheres and how the atmosphere of Mars compares to that of the Earth. At this point, the team illustrated what happens when water interactions with certain kinds of rocks on the surface of Mars, simulated by baking soda, to show why Mars has an atmosphere largely of carbon dioxide. From that point the students were tasked with making sure that oxygen could be produced, electricity made, and that people could communicate if they were on Mars. The students making oxygen had to use electrolysis to separate water into hydrogen and oxygen. The students generating electricity implemented solar panels to charge batteries. Finally, the students tasked with communication had to build a crystal radio. We are happy to say that all criteria for immediate survival were met! 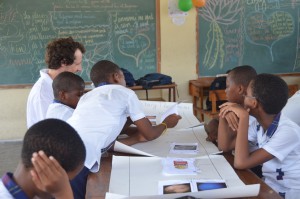 Ralph and I had students attempting to land astronauts on Mars. To begin the activity, we discussed Spirit, Opportunity, Curiosity, the Phoenix Lander, Pathfinder, and the Viking Landers and how they were able to successfully land on the surface of Mars. We had students look at pictures and cards of retro rockets, parachutes, airbags, and the sky crane (used to land Curiosity). Then students were tasked with designing and building a lander of their own that wouldn’t injure our plaster astronauts and they had to do so on a budget of $500 in monopoly money. All items available to be used had a price, even the tools like scissors and tape. I was so impressed with all the different designs and ideas that were produced by the students. I was even more so impressed with how little some were able to spend. While a few astronauts hit a rock on landing or fell out of the lander, a majority made it safely to the ground. While we may have been a little boisterous at times, the sharing of thoughts and ideas was truly what produced the great designs of the landers. I look forward to what tomorrow has to offer. 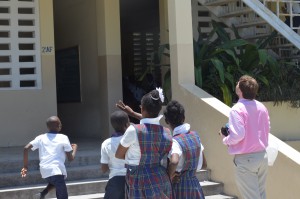 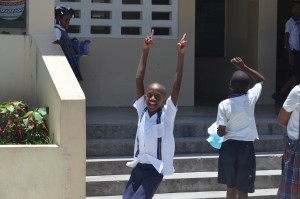