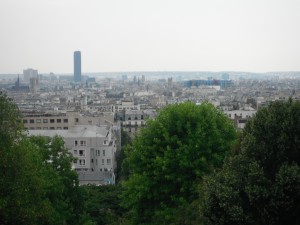 Before coming to France, we all had many pre-conceived notions about what the city would be like. Some of these turned out to be true, but many of them were mere misconceptions. There are also several aspects of the city that we did not know about at all, and to which we’ve had some trouble adjusting. These past 3 weeks have been a learning experience to be sure.

Many of us were warned that Parisians were all snobby and rude, but this turned out to be mostly untrue. Of course there are jerks everywhere, but most people we have talked to were perfectly polite, and appreciated it whenever we tried to speak French.

We were also surprised to see that not many people actually wear berets. I (that is, Gaju) saw exactly one person wearing a beret, so I guess they’re not as popular as we’ve been told.

One stereotype that is true is that almost everyone smokes cigarettes. You see people smoking everywhere, far more than you see in the United States. People don’t even taking a second glance at you if you are smoking.

Another thing most of us were told was how bad the city would smell. I (Erin) found this one to be partially true. Most places are fine but the metro in particular does have a strong odor. Whether that is that different from the US though is not necessarily the case, I’ve gone into plenty of smelly subways at home.

We were definitely surprised at how little or no ice is in the city. I had no idea that it would be so hard to get ice, particularly in bulk which does not seem to exist at all. The only occasional cubes we have found have been quite sparse. Although this seems like such a small luxury with the heat wave thats been going on it’s really one we have all found to be rather difficult to live without.

Another rather large difference is how much cheaper alcohol is than water, soda, or juice. Most restaurant’s charge at least five or six euros for water or juice but a glass of wine will only cost you around three euros. This probably wouldn’t fly in the U.S. specifically because our liquor restrictions are a lot more harsh. Also when in a bar the bartenders will actually get rather mad if you order just a water. In order to get a water you need to have an alcoholic beverage which seems rather counterintuitive, but makes sense considering they only make money when you order alcohol. Still seems a little harsh to not allow you to get water.

Compared to the US, France has some pretty bizarre packaging on tobacco products. At home, it’s always just “The Surgeon General warns that you *may* experience negative effects.” Here, you can’t go anywhere without seeing a black lung on an operating table or a set of rotted teeth with the caption “SMOKING KILLS.” Smoking is far more socially acceptable here in France, as well. Outdoor smoking is protected, and many establishments have designated smoking areas inside the building.

Surprisingly, there isn’t a signature French dish. Foods are very regionalized here, with one area’s specialty being drastically different from another. Food here is very rich, with lots of butters, creams and carbs incorporated.

When it comes to getting around, the Metro is king. The 14 subway lines and near infinite busses can get you anywhere in the city, and are further bolstered by trams and heavy rail for carrying people to and from the suburbs. The “one size fits all” Metro pass is far cheaper and far more convenient than CharlieCards back home. Additionally, Parisians are actually encouraged to take public transportation. Rather than constantly cutting Metro budgets, the city will give incentives such as free Metro days to encourage people to ditch their cars.

Almost every cafe, brasserie, and restaurant will serve a basket of bread alongside the meal. Not that every single Frenchman will be seen with a baguette under their arms but for the most part it is true that there is bread everywhere. Slices of thick French bread is abundant from the aforementioned baskets in restaurants but where there is a shop selling sandwiches chances are the slices baguettes. Also, despite French fries not being actually French a side of frites are also a common site.

Tourists are warned of gypsies and beggars coming up with cunning ways to swipe anything of value from anyone gullible. It works by distraction- you stop to read something like a flyer or a cardboard sign and hey go in after your purse or money. It is common that they use children to pickpocket you for they are smaller (harder to notice, easier to hide/get away) and they would be more nimble and quicker. It is sad that this happens but the warning is useful and anti-pickpocket tactics definitely do come into handy. Paris is no doubt lacking in petty theft, so watch out!

Co-ed/Unisex toilets are a lot more normal here. While  a lot of places do have separate femmes/dames and hommes/messieurs toilets, it is not uncommon to see a restroom unmarked for a specific gender. Even multi-stalled bathrooms where any gender may relieve themselves can be found.

On a whole, Europeans seem to be a lot more relaxed about the human body than Americans. Americans for some reason have developed the idea that it is taboo to not have your body covered, and that in Europe it is more free. So naturally one might expect a bit more nudity around Paris. But no, it is not that uncovered.

Throughout the trip, the many subway rides and walks have made us notice the lack of advertisement for medication. In the United States, there seems to be a large amount of advertisements for medicine for sickness, depression, and not as many for events and movies. Here in France, most of the advertisements seem to be for events, new movies or shows, or amusement parks.

Talking to people we’ve met here at the cite made us notice the differences in the conversation topics. The students seem to be interested in talking about more cultured topics such as politics or what is going on in the news as opposed to what happened on the last episode of Keeping Up with the Kardashians. They seem to have more  knowledge of what is going on in the world around them.

The organization of traffic seems to also be really different here in France. When walking one must know that pedestrians do not always have the right of way. The walk signal does not mean that cars will stop, and cars can randomly drive and park on the sidewalks.

In addition to the traffic, another big difference in the streets of France has been that people can urinate on the streets. This is very different than in the United States where people would be charge as a sex offender.

It has been interesting to see the many cultural differences here in France. We will definitely leave this country a bit more cultured than when we got here.