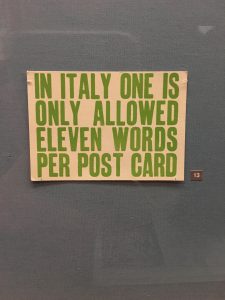 On Friday, March 15th we went to the British Museum and saw a postcard show called, “The World Exists to Be Put on a Postcard” and there was postcards from 1960 to Now. They were all very interesting and I like how they were set up in different sections. My favorite section was the one titled ‘Graphic Postcards’ because it had simple designs on the postcards, and many of them included type in there designs. My favorite one was titled, ‘Italian Lesson’ and it was by Erica Van Horn the postcard just says ‘In Italy One is Only Allowed Eleven Words Per Post Card’ in a green sans serif. I really liked this postcard because it used type in a clean way but it also use the amount of words and the context of the words in a really cool way. The postcards in Italy are only allowed 11 words and her postcard only uses 11 words while explaining that rule too. The show overall was really interesting because I collect postcard wherever I go so seeing all these artists use postcards a quick and easy medium was really cool and inspiring to see. 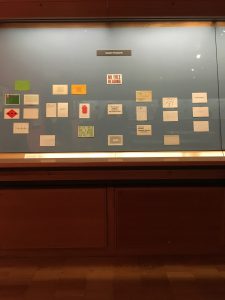 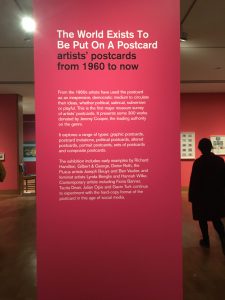