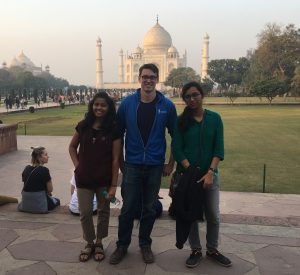 Taj Mahal with Shreya and Shweta. FYI the outside > inside.

I am fully in the afterglow of the program. I’ll admit that the travel on the last few days of the trip was intense, but a few hours of sleep in my own bed and a proper home-cooked meal made me right as rain.

A good thing to note for future/prospective students is that you should try and get a few hour layover somewhere on there way there and on the way back. The value of the layover is that you get to stretch your legs and ideally you will have enough time to get a better meal than you would on the plane. Four other students and myself stopped in Munich, Germany for near nine hours, which was plenty of time to nap, eat, and rest before the final leg to Boston, Massachusetts. Airbrau, in the H terminal in Munich, is a great place to get some German food and drink to reset after 19 days of Indian food.

I want to thank both Professor Mehta and Professor Obal for their support and guidance through the coursework and travel. We had some bad luck with the bus rides. On separate occasions a tire blew and was punctured along with multiple police stops, and metropolitan traffic. The professors did not let the setbacks affect their outlooks even though in total it added an ~10 additional hours to the travel-time. I hope the professors who attend next year are able to be rocks for the students as well.

Another two people who need to be thanked are Shweta and Shreya from KLE’s BVB college. They were gracious enough to accompany the group to Agra, Jaipur, and Delhi. Their company and role as translators in times of distress cannot be understated. They were two people who were able to advocate for the group in situations where Professor Mehta’s Hindi was insufficient and so a BIG THANK YOU TO THEM. They also are just cool people to hangout with even when they are not getting us out of a bind. I wish them both the best of luck with their future endeavors. They are included in the group of students that I have kept in touch with (I know it has only been a few days), but still wanted to specifically address them here.

And a final thank you to Professor Nitin Kulkarni who has worked with Professor Mehta on developing the program into what it is. He is entirely responsible for the positive experience I had staying the the BVB Scholar’s house.

My final thought on the program is that it is a whirlwind experience. A two week intensive course with four days of heavy travel has me left with one thought, I need to go back. India has so much to offer and as I was only able to experience a small fraction of what looks to be worthwhile. Learning more about India from the other students showed me that there is such a rich and varied experience to be had all across the country from Hubli to Goa to Hyderabad.

I cannot recommend the experience enough. Thanks for reading.

P.S. This experience taught me that people are the same everywhere. A sentiment that is simple and seems to be a given, but there is a difference between knowing it and experiencing it.