We started off the day with a lecture at the Centro de Estudianos Martianos. The lecture was about the student youth movements in Cuba. Our professor took an unconventional approach to the topic. Rather than beginning with the youth movements themselves, the dates they were formed, their purpose, their actions, he started by talking about Ancient Greece. He continued through history, describing the founding of European universities, the differences between Catholic and Protestant institutions of education, and finally brought us the University of Havana. It was a fitting subject for the day after the 288th anniversary of the founding of the University of Havana.

The lecture started off with the professor reciting his information, pausing every few moments for the translator to clue us in as to what was going on. It was before our coffee break, so we sat quietly, trying to pay attention. But as the class progressed, the professor became more animated and the lecture was more engaging. A student asked him about racism in Cuba. After trying to deny its existence, the professor finally conceded that there was racism in Havana, but only because Havana had taken on many capitalistic characteristics. He concluded by saying that there was no racism in the countryside, and that “the future is in the countryside.”

We had a chance to observe the countryside that same afternoon. We drove outside of Havana to the Escuela Internacional del Cine (International School of Film). On the bus ride, I reflected on what the professor said that morning. We saw many farms, but we also saw more poverty. The houses are smaller, and not as well kept-up. There are also fewer cars on the road. More people travel by bicycle or even horse-drawn carts. I understood the merits of living in the countryside, closer to food, causing less pollution. But we also passed by a dirt road strewn with trash, and I’m not sure the professor’s future is one I want. 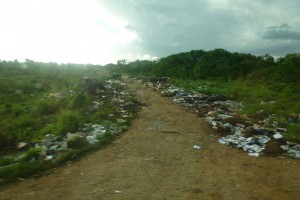 Amidst bucolic countryside, a small collection of buildings sits atop a small hill. A collection of disused athletic courts slowly crumbles nearby. The paint on the basketball court has worn away, exposing the concrete. A pile of branches lies in the middle of the tennis court. Inside this small, unassuming campus is a highly competitive film school, where students from 23 different countries learn to perfect the art of movie-making. The campus resembles a small American college, with a dining hall, a dorm, classrooms, and an athletic area for its 120 students. The school is purposefully isolated, so it is quiet for the students to shoot their films and focus on their craft. We were able to see two classes in progress. When we first walked in, students were walking around with sound cranes, practicing how to maneuver with the large, unwieldy pieces of equipment. We also quietly slipped in the back of a class learning how to use visual equipment. The tour began and ended with a hallway that displayed movie posters of the films created by the students as their final project. The visit was a good reminder that education does not depend on gleaming, state-of-the-art buildings, or the latest technology, but rather a desire to learn. 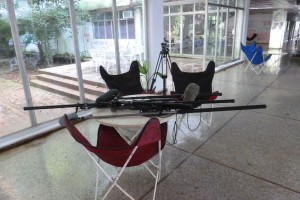 We arrived back in Havana with about an hour and a half to explore before dinner. A group of kids was racing down the street in little make-shift scooters. One would run down ahead of the rest, to check the intersection at the bottom of the hill and wave the others on if the way was clear. It felt like stepping back into the past, with children playing in the streets, and the adults standing around on the sidewalks, talking.

We walked down the Malecon and saw the clearest juxtaposition of past and future of the day. There were two sheep grazing on the side of the road in front of a high-rise apartment building. The agrarian past mingled with the industrial present. A distance as small as 90 miles can bring big changes.

When we returned from our walk, the sun had set and the sky was darkening, but the boys were still racing their scooters down the hill. We watched them until their moms called them home for dinner. Then we, too, went in to eat our own delicious meal of pork, rice, beans, and fried plantains.