Henson Phan plays with Luna who is the “pet therapist” at Hospital de Dia.

After spending the day in Talca and visiting a psych hospital; I have much respect for these psychiatric nurses who are taking care of these people.

Our first visit involved an inpatient psych facility that housed A LOT of patients. We were supposed to arrive at the location at 9 a.m., but ended up being there at 8:30 a.m. I learned that it was rude in Chilean culture to arrive early, but the staff welcomed us with open arms. A security guard welcomed us by opening the gate that led to the facility. After coming inside the gate, we were welcomed by 3 or 4 patients who were getting some fresh air. All of these patients were most likely above the age of 60, but they all shook our hands and gave us kisses on the cheek. The first thought was “I am in a psych facility. You aren’t supposed to touch the patients; we were told not to in America,” but these patients were so kind that I didn’t feel an ounce of danger. Besides, kissing on the cheek is a way of greeting here so its not like they’re intending to invade personal space. 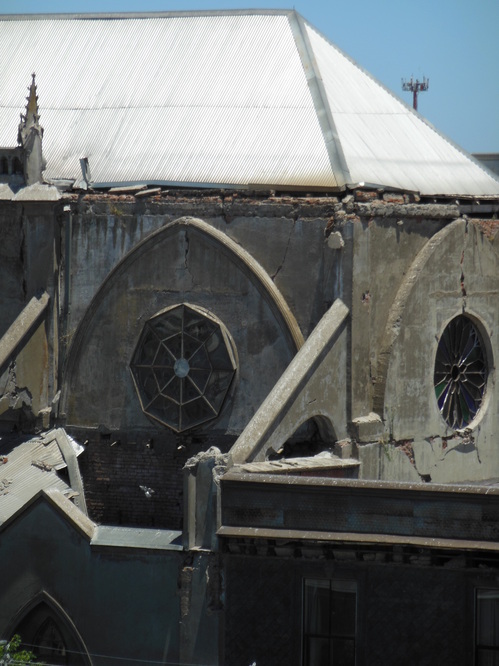 Earthquake damage at a historic church in Talca, Chile.

After, we met with more patients, younger patients who have been in the (temporary) inpatient hospital for more than 30 days. The earthquake destroyed the main hospital so this inpatient hospital is actually temporary. Many of these younger patients’ ages ranged from 20-50 and they suffered from depression. Regardless, everyone was interested in talking to us and asking us about the American culture such as music (they all thought that Lady Gaga was “loco”) and movies. The patients seemed to have a good relationship with the nurses. The patients sat in this large recreational room/dining room on these black couches with the nurses sitting directly next to them as if they were friends. This bond that I saw between the patients and nurses did not match what I saw back in the U.S. during my psych clinical rotation. From my experience in the U.S., it seemed like the nurses and psych patients always kept their distances. The depressed patients were always quiet, and I would always struggle to get a word out of them. Finding out that these Chilean patients were admitted for depression surprised me since many were smiling and talking up a storm.
Later we went to a different part of the building where they held many of the geriatric patients. Most of these patients did not have family who visited them, but according to the staff,Chileannursing students and others wouldvoluntarily come visit the patients on their free time. All of the geriatric patients were very kind and I probably shook about a million hands within a period of 15 minutes. All the patients came up to us holding our hands, putting their arms around our shoulders. Every one of the patients had the biggest smiles plastered on their faces. “Momma” Val even made a new friend when one of the patients followed her around for an hour holding her hand and calling her “mami.” The most amazing thing about this is the fact that there is only ONE nurse taking care of these 80-something patients. ONE. How? I don’t even know. Maybe the Pisco Sours here in Chile gave this nurse super multitasking powers, but I would never be able to handle over 80 patients every day at work. Somehow, the nurse working in this facility makes it happen, and for that, I applaud him.
View a photo gallery from the trip.
Read older (and newer) posts in thearchive.