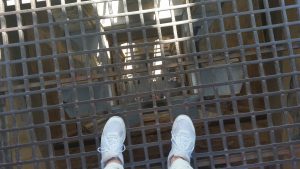 Not many people can say they walked 1.8 km to ascend and descend over 400 stairs and take in a birds eye view of Florence, before 11am on a Tuesday. At least 8 Riverhawks can.

This is not my first time in Florence, nor hopefully will it be the last, but this was my first time climbing anything so exhausting. I thought my knees, feet, thighs, and breakfast would all cease to exist. My reward was a view unlike anything I have ever experienced, and the triumph of completing my 2nd European tower climb. (My first was St. Paul’s Cathedral in London, which I have completed twice.)

One of the greatest things I love about these cities is that you can walk everywhere. Europe in general puts a large emphasis on efficiency and conservation, so the majority of people here walk or bike to get places. It is quicker and easier to walk somewhere than to take a cab down the winding, narrow, tourist-filled streets.

My Fitbit is doing all it can to catch up to European Andréa, since American Andréa is so boring and idle. My 10,000 step goal is reached by noon almost every day here, when on a normal American day I barely reach 8,000. (Unfortunately, the exercise does not outdo the food–this is the land of carbs, after all.)