With the Society for Terrorism Research (STR) 8th Annual International Conference fast approaching, STR, partnered with the Center for Terrorism and Security Studies (CTSS), is launching a series of guest blog posts, written by those who will be presenting their research at STR14. In the sixth installment of this series Detective Jeff Thompson (@nonverbalPhD) discusses his work on the lessons learnt from the Beslan School Siege. Detective Jeff Thompson is the 2013/2014 recipient of the New York City Police Department Commissioner Raymond W. Kelly Scholarship and attended Columbia University as Research Scholar.  His research topic was crisis and hostage negotiation as well as terrorism related incidents [This article does not reflect the opinion of any group or organization that he is employed by or a member of].

Ten years ago terrorists in Beslan, a town in North Ossetia Russia, seized a school full of children, in what is still one of the deadliest terrorist incidents to have occurred.  The incident provides valuable insight with respect to crisis and hostage negotiations that can assist negotiators and government officials to be better prepared if they were to be involved in a similar situation where negotiating with terrorists could be the best option to ensure the least amount of casualties are suffered. Despite the incident having displayed numerous moments that were clear examples of the terrorists escalating violence, the Beslan incident also offers valuable insight into missed opportunities where negotiators could have employed certain tactics that could have increased the chances for a more peaceful resolution.  A review of this incident, specifically conducted by Adam Dolnik (and co-author of our paper) demonstrates that established crisis and hostage negotiation skills can be effective yet the established methods of determining if a hostage incident can or should be negotiated as well as the methods of measuring progress needs to be reviewed.

In Beslan, the incident began on September 1, 2004 when a group of terrorists (among the many disputes claims related to this incident includes the amount of terrorists involved.  Reports state it ranged from 32 to near 100 people) from Ingushetia (Northern Caucus region of Russia) entered School 1 in Belsan and quickly took 1,200 people hostage. The terrorists seized the school stating they were seeking “peace in Chechnya” which included the removal of all Russian forces from the region and the resignation of Vladimir Putin as President of the Russian Federation.

The initial incident included a gunfight between armed parents and the hostage takers.  The shootout quickly ended after the hostage takers announced that for each one of them killed, they would kill 10 hostages.  Only a few hours into the incident, the terrorists killed twenty men after they were forced to assist with setting up explosives throughout the school and shot a father in the head killing him in front of his two sons.  The violence sporadically continued throughout the 52-hour siege, and included a terrorist’s explosive-laden vest detonating inside the school killing her, other terrorists, and hostages. The cause of the detonation was never determined but it is believed to have occurred by accident.  Other reports state that one of the group leaders detonated it purposely after the female terrorist argued with the leaders about taking children as hostages. Further acts of violence included an injured male adult hostage being shot in both knees and having his skull repeating bashed by the terrorists using the butt-end of their rifles.

Children hostages were submitted to psychological torture too.  Water was no longer given to the hostages, including the children, on the second day forcing some to drink their own urine.  Some terrorists displayed chocolate for the children to see, yet while they told them the feel free to take it they finished the statement by stating that if anyone took the chocolate he or she would be shot immediately.

On the third day Russian forces began an assault on the school to reclaim it from the terrorists. What caused the attack- either the Russian forces pre-planning it or them reacting to explosions from within the school remains disputed.  At the conclusion of the event, the death toll was substantial.  A total of 331 hostages were killed, 176 of which were children.  31 terrorists were also killed.

The very taking of hostages made this event a two-phase incident.  A single-phase incident is one in which negotiation is not an option because the terrorist initial actions also concludes the incident.  An example is a suicide bomber.  Beslan was different as hostages were taken displaying the terrorists’ intentions to use the people as a “good” to be “traded.”

Despite the violence, opportunities did exist for negotiations to occur. First, terrorists do in fact negotiate and second, terrorists reciprocate.  The Beslan incident showed us despite the unfolding violence, traditional negotiation tactics still had an opportunity to contribute to what possibly could have been a peaceful resolution.

First, the terrorists were willing to negotiate and this was demonstrated multiple times throughout the ordeal.  The fact that they had stated demands is a clear signal of willing to negotiate.  Further, they repeatedly tried to establish contact with the authorities and also asked for individuals to come to the scene to act as intermediaries. Although conversations did occur between the government and the terrorists, it was sporadic and minimal.  Proper negotiations and discussions regarding the terms of the terrorists’ demands (via utilizing such skills as active listening) could have lead to opportunities to explore options and negotiate alternatives.  Not talking with the terrorists prevented this from occurring.

Second, despite the situation being terrorist-related, the role of reciprocity that often occurs in traditional negotiations was also present in both a positive and negative way.  First, the terrorists did free children and nursing mothers. This demonstrated a willingness to negotiate, make agreements, and a clear understanding of quid pro quo. Negotiating some of the terms, which President Putin allegedly was open to such as trading the children for prisoners, never occurred. A negative demonstration of the terrorists’ reciprocity was their response to media claims that Russian forces reported that there were only 354 hostages inside the building and that they had made no demands.  This infuriated the terrorists and resulted in water no longer being provided to any of the hostages. Correcting this through the media could have led Russian forces first asking for the release of some of the hostages.

Ten years later there are still many lessons to be learned for crisis and hostage negotiators, law enforcement command staff, governmental officials, and others that could be involved in a similar incident (see Figure 1).  Clearly the first would be to engage in actual discussions and negotiations.

Admittedly many countries continue to express that they “do not negotiated with terrorists” however the incident in Beslan provides a reality check that in the absence of alternatives, what other choice do you have?  Sure, in what could be described as more traditional crisis and hostage incidents killing of hostages is clearly a sign of seriously considering immediately ceasing negotiations and warranting a tactical response.  However this incident demonstrated this was not possible. Realizing the issue of “saving face” also applies to the government involved, the use of third parties as mediators can become a face-saving tactic as well as a genuine negotiating tool.  Learning from these missed opportunities that occurred in Beslan can help those that might be involved in the next incident be better prepared when, not if, it occurs again.

Detective Thompson is a professional mediation, has a M.S. in Negotiation, and is near completion of his PhD in Conflict Resolution.  Detective Thompson will be presenting “Crisis Negotiation Techniques In Terrorist Incidents: It’s Been 10 Years Since Beslan- What Have We Learned?” on Day 2 of the Society for Terrorism Research Conference on Communication and Collaboration for Counter-Terrorism, September 17-19th, in Boston, MA. 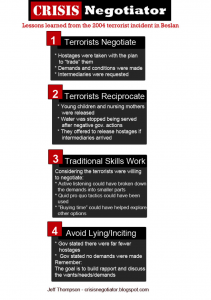