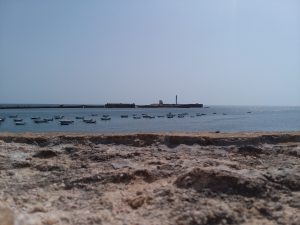 Traveling to Spain and taking the opportunity to study abroad in Cadiz has been one of the best decisions I could’ve made. The amount of practice and life experience that I have acquired while traveling in Cadiz has pushed me even further. I’m grateful because not only has my Spanish speaking and comprehension skills increased in major ways in the past week, but I have also taken advantage of my time in one of the most enchanting cities of Spain. The benefits that I’m already seeing are making me feel reassured in my decision to leave home for a month.
It’s the perfect sized city. One that is large enough where you can always find new shops and streets to explore and small enough that when you do get lost you can easily find your way. The streets all have the same European look to them, which makes getting lost a common occurrence (for me at least). But once I had find a main street, I’m good. The city is surrounded by water on 3 sides. The location of the city makes it perfect for trading and fishing. These influence the economy and the food in town.
This city also has a large historical presence. With Roman ruins just a 15min walk away and the arabic influence still evident. I find the culture, the people, the architecture, everything so captivating. The different layers of cultures blending together. The Moroccan influence, the Christian persuasion, the Jewish culture as well. It’s quite an interesting blend of identities. 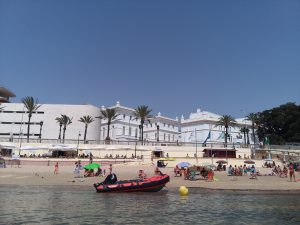 My favorite part of Spain has been the complete cultural immersion. There is no speaking Spanglish and getting away with it here. Living in the United States, most people will understand when you switch between Spanish and English to communicate. While living here, I’ve noticed that although people speak English, it’s easier to understand their Spanish. My host family doesn’t speak any English which makes the conversations very interesting at times. I’ve found that the native speakers are patient and will help with tough words, but they want to see that you’re trying. Showing that you respect their language and have taken the time to communicate in a foreign language shows. Of course, there are the universal signs that people also naturally give while conversing. Body language, tone and expression all help in carrying on a conversation. It also gives you nonverbal cues of how to respond.
One of the most surprising things for me was realizing the UMass students wouldn’t all be studying together. The first day we were split up by Spanish level. We were then placed in a classroom with other international students. People from all over the world: Russia, Italy, California, China, Las Vegas and Germany. It was the first time I had heard Spanish spoken with a Russian accent! I’ve been trying to take advantage of the diverse student base here. I sit with the Russian students at lunch and ask about different customs they have or traditions we share.

I’m excited to see where these last few weeks take me! Hasta pronto.