My experience in classes here in Cadiz has been amazing, although different than the majority of the students travelling with me. Due to my different placement, I was put into a class with several international students, rather than a class with just students also from UMass Lowell. There are students from Sweden, Scotland, Germany, Ethiopia, and Russia. It’s always interesting to hear our professor ask us to compare our own countries with that of Spain. At least once I day, I get to learn about another country in addition to Spain, and that’s incredible. It broadened my perspective of the world, especially since I was the only one from the United States, and the majority of the students are from Russia.

For the most part, my class is completely immersive. Due to us all being from different countries, the only people with English as their mother tongue is myself and Mairi my classmate from Scotland. Many of the other students started learning English very young, but the fact that it’s not our collective first language means that we rely more on Spanish to communicate. This forces us to focus on practicing Spanish even more, because outside of class or when we ask each other questions we use Spanish as well. I think this is the biggest difference, and the biggest advantage to learning Spanish here in Spain rather than in a normal classroom setting. At no fault of the schools in the United States, the students tend to speak English to each other under their breath or outside of class. Here, Spanish is significantly more dominant than English and the added practice adds to the learning process.

The set-up of classes here is also different than what I’m used to. Classes are Monday through Thursday, giving us longer weekends for side travel or extra studying. In the morning classes begin at 9:30, which is a nice time in my opinion. The first class is two hours long, followed by a half hour break in which we’re allowed to get a snack or coffee at the cafeteria and sit with other students. The cafeteria is always busy with students, and sometimes it’s hard to get your order taken before it’s time to return to class. My go to drink is café con leche (Coffee with milk). The coffee here is significantly stronger than that in the United States, so the milk (and lots of sugar…) help the taste, in my opinion. 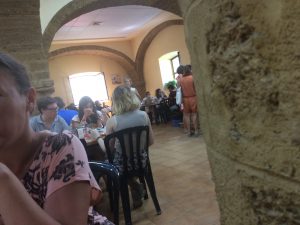 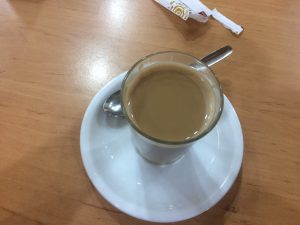 The second half of classes is from 12:00 until 2:00 with another professor. I think having two different professors is nice as well. It gives all the students two different perspectives and often two different styles of teaching. What was most interesting for me is that my professors didn’t have conversational English skills. This also forces me and my classmates to truly think in Spanish or even just to ask questions in Spanish. Again, it’s different from classes in the United States, because professors there speak both languages fluently.

The material of the class I’m in (Nivel A2.2) has also has helped me greatly. It covers several grammar forms, some that I needed refreshing on, and others that I hadn’t had much practice with. It’s a helpful overview for anyone at the Spanish 3 or 4 level. I really enjoyed having both the grammar overview, the lesson taught in complete Spanish and being forced to practice speaking the language in and out of the class. I think all these things combined made for an extremely intensive and immersive study abroad experience. It’s truly helped me think in Spanish, to the point where I’ve had to go back through this blog and change a few Spanish words back to English!