As my six weeks in Cádiz are coming to a close today, I cannot be more grateful for the wonderful experience I have had. Each city that we have lived and traveled to Spain has come with its own beauty. Up to this point, I have had the privilege to visit Cádiz, Sevilla, Rota, Jerez al Frontera, Baelo Claudia, Tarifa, Granada, and El Puerto de Santa Maria. Out of all, I definitely have a soft spot for Cádiz as this is where I have lived for the past month and a half.

Yesterday, we had our final “Hasta Luego” celebration at the University of Cádiz, where we shared Jamón Serrano, La Ina wine, and laughter-filled conversation. It was incredible to watch how delicately the jamón serrano, or thigh of the pig, was cut into thin slices or small pieces, and even more so how easy it was to eat! The jamón serrano almost melted in my mouth with each bite; I did not know ham could taste so good. Next, was the sherry wine (appearing as white wine) called La Ina. A wine barrel was raised on a stand with a hole at the top, where a woman looking like she was ready to dance flamenco used her years of experience to use an elongated tube-like ladle to scoop the wine out of the barrel and flawlessly pour the wine into the glass at such a great distance! I attempted to pour the wine just the same and could not seem to manage it; that takes a lot of skill! I am so happy to have been a part of such a respected Spanish tradition.

I have enjoyed my time in Cádiz and appreciate all of those who helped make this experience that much better. I would like to shout out to Maria and Patricia for constantly ensuring we had a safe and enjoyable experience. Their knowledge and experience in each subject and part of Spain was complimented by their great sense of humor. I would also like to thank my two professors, Alberto and Inés, who helped me create a strong foundation and structure of the Spanish language through activities that cater to my learning ability and laughter to break any anxiety. I am proud to wear a scarf of the fútbolistas with the colors of Cádiz. I have learned so much from such a small town in just a few weeks and I cannot thank UMass Lowell enough for this opportunity! 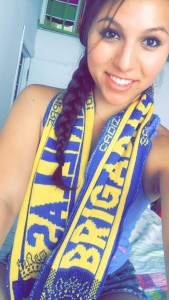 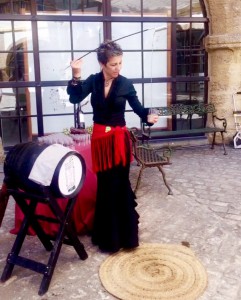 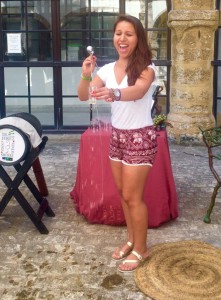 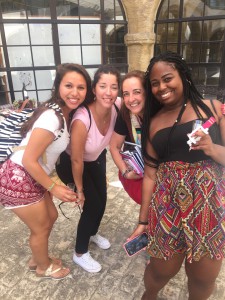 From my very first night in Cádiz, I could not help but to notice the unity of the population. I was welcomed by a family of four (mother, two daughters, and one son) that eats, talks, shares and creates memories with each other. They outstretched their hands to me and I gladly took hold. The family introduced me to Cádiz during a period of exciting games for the fútbol (soccer) team, as they were reaching a higher ranking. I saw families, friends, and strangers all wearing yellow and blue packed into one little plaza sitting, standing, and singing together. As the game progressed, many conversations and laughs were exchanged between people of all colors, shapes, and sizes. I felt as though I entered the plaza as a foreigner, I walked out as friend.

Ever since that night, I have recognized that the people of Cádiz accept others for who they are, not what they can be. It is not about who looks or dresses the best, as much of the media of the United States enjoys to promote, instead the vast majority Spaniards I have met focus on personality with appearance as secondary. This can especially be recognized on the beach, where women of all body types will wear just as much (or as little) as men. The human body, mostly that of women, is not objectified; it is just another part of life.

With a few that skew from standard, Cádiz has displayed an example of unification and acceptance that I believe the United States should highlight. If a vast population of people can come together to watch a game and celebrate a victory by splashing around in the city’s largest fountain at night, singing and dancing alongside a moving double decker bus with the fútbolistas (soccer team) on top, and sharing the excitement in the streets without violence or excessive intervention from the police, I believe people can live in peace and love each other anywhere. Thank you Cádiz for being such a great role model…finally. 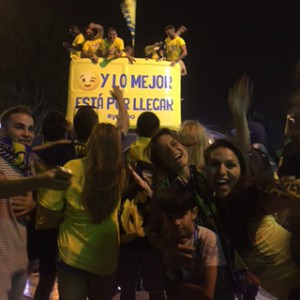 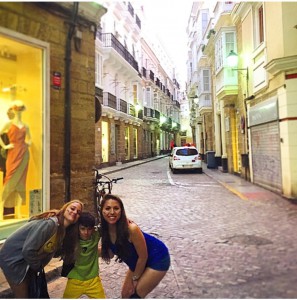 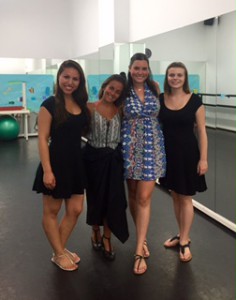 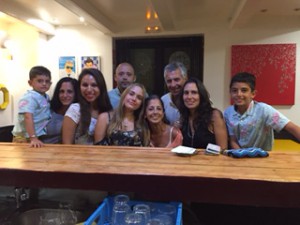