So far I have been in Cadiz for the first 4 days of the second session. This city is very small but if you don’t know where you are going you can get lost easily and end up along the ocean but miles from where you need to be. This was my experience on the first day when I arrived in Cadiz. I spent many hours looking for the university and then getting lost. Although Cadiz I much more than that it is a very pretty city with a very lively culture and the people are very kind. The classes are very accommodating to all students and ability levels and I have not felt rushed or overwhelmed by my teachers. During the first day of classes I was given a tour of the city. This included La Plaza de San Antonio, La Plaza de Mina, La Plaza De Las Flores, and many other places this tour showed me how diverse and culturally significant this city is and how the style of the city varies every few blocks. During my second day I learned about the history of the Spanish languages. It interested me a lot how the different languages were all contained into their own perspective regions. Another very interesting part was that some of the oldest languages in Spain have no known roots. I have also seen the el Museo de La Catedral, La Catedral, and El Torre de Reloj. These places were so fascinating and each had its own unique parts. All of the catholic artifacts and pristinely created pieces were amazing to see on display in El Museo de La Catedral. The most impressive part of La Catedral was that each chapel had its own distinct characteristics and they were so intricately designed. It was fun to take pictures and see the city from above when we climbed to the top of El Torre de Reloj. Also while we were up in the tower we the bells ring. Although it was very loud the experience of being in a bell tower when the bells rang was a very unique one. I learned about the history of the flamenco and how the flamenco is different from the flamenco in other Spanish cities. The flamenco of Cadiz has a different rythmn to reflect the passion and attitudes of the people of Cadiz. It also has a unique sound with parts originating from Arab music. I learned the history of Spain and its long history of inhabitance and discrimination of religious groups. The interesting part to me is how the majority religion of Spain has changed multiple times in its history and now the cultures can mix well together with all religions. 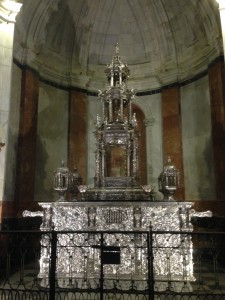 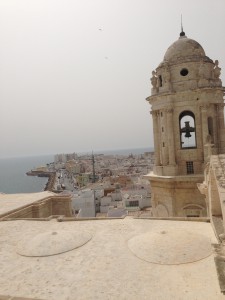