We have arrived at our final camp site of the season: the South Fork of Upper Wright Valley. Not entered by Griffith Taylor and his field team during Robert Falcon Scott’s expeditions 100 years ago, Wright Valley was first explored in the late 1950s by Colin Bull and three other young New Zealand geologists.  Soon after, in October of 1960, the U.S. Navy’s VXE6 flight squadron observed a small pond in South Fork that, unlike all other bodies of water here in the Dry Valleys, was not covered by ice.  What they encountered later became known as Don Juan Pond, the saltiest body of water in the world. 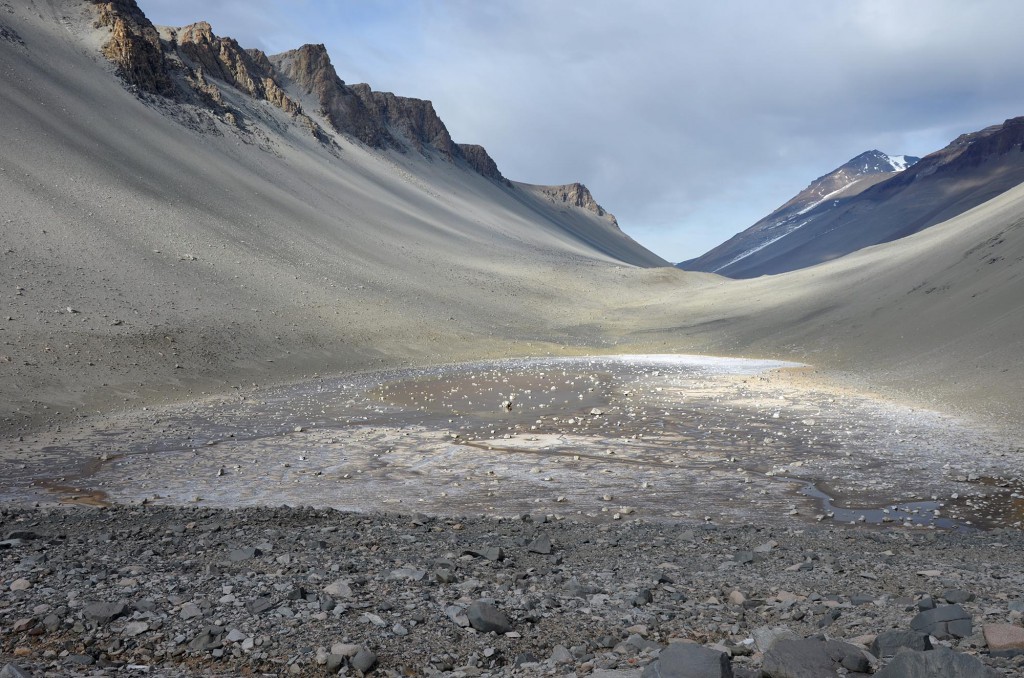 Don Juan Pond quickly became a provocative location for biologists, hydrologists and geochemists trying to understand how liquid water can exist throughout the entire year in one of the coldest places on Earth.  After more than half a century, we still have fundamental questions regarding whether life can actually exist in Don Juan Pond and what is responsible for such a high concentration of salt.  The pond also prompts us to speculate about the potential for a similar body of water to exist on Mars, where hyper saline brines may be flowing today, and liquid water was far more plentiful in the ancient past.

While we are camped just a few hundred meters west of Don Juan Pond, our primary target of interest this season is an unusual rock-covered lobe that abuts the western boundary of the pond. Many similar lobes in the Dry Valleys have clean ice buried just under a thin cover of rock and soil (“debris-covered glaciers”), but no scientist has ever documented ice in this lobe.  Instead, if you dig a pit anywhere on it, you’ll find what we call ice cement: frozen soil cemented together by small amounts of water.  Is it possible that this lobe formed in the absence of massive clean ice?  Or did it form as a typical Dry Valley glacier then lose almost all of its ice when the climate changed?  If so, why didn’t other glaciers elsewhere here lose all of their ice?  We’ve been taking samples and running Ground Penetrating Radar (GPR) scans to help image the subsurface to see if there is ice buried at a greater depth.  When we compare these data to data we’ve collected at our previous sites, we may be able to answer some of these questions.

Morale has been quite high of late, as we have received several care packages from home, containing plenty of treats for us all to share.  An extra special one was sent to us by Ms. Choe’s 4th grade class in Plano, TX.  Each student took the time to send us a card with fantastic drawings of Antarctica and Mars, and several questions about what it is like to live down here and what it’s like to be a scientist.  We’ve had fun every night after dinner writing down answers to their questions, which will soon be put onto a helicopter and sent all the way back to Texas.  Thanks so much for the package, Ms. Choe’s class!